True Purpose of Religion and Spirituality

True religion, leading to spirituality, should always bring about expansion, elevation and excellence. Expansion not for the body, but in the mind level.

B’s son has come. Perhaps for the second time. He seems to be a good boy and I want him to develop a good personality so that whatever he proposes to do, he will be able to do well, effectively and with excellence. He comes from a good, pious, religious family.

I was born in a village environment. I grew with the traditions of those days in the village. I was very pious. There was nobody to guide me either about the modern world or about spiritual matters. Nobody was there to set an example. Economic standards were not high. May be I belonged to the second generation of educated people in my village. So you can imagine the situation.

Having grown up in such a background, because of my own irresistible quest, I got into this spiritual path. Everything followed rather very fast. I went to Calcutta, stayed there for a few years and met my Baba. Very early in life I became a sannyasin and came over to Kerala. The Kerala I had left, and the Kerala I saw later when I came back, were to some extent different. The Kerala background of my life as well as the sight of new Kerala, after the spell of about 6 years’ exposure to Calcutta, gave shape to my thoughts and evaluations.

My dear boy, what I have to tell you is this: don’t take religion in the way it is understood and practised. True religion, leading to spirituality, should always bring about expansion, elevation and excellence. Expansion not for the body, but in the mind level. The body begins its growth right from the state of its inception in the womb. After birth it keeps growing. At 21 years or so, it completes its possible growth. You become an adult. Thereafter the growth is always at the mind level.

In the highest level of evolution, we do not try to amass and acquire things. On the other hand, we try to leave and dispossess. Amassing is a need of the impoverished mind. Possessiveness indicates a poor mind that has not grasped its own potential. Unable to assess what it wants, what it can do, the mind draggles the things of the objective world. It goes outside and tries to possess. For a true yogi, acquiring and amassing is like a crime.

Yesterday I was explaining to this little girl. All of you were there when I was explaining and talking to her in Malayalam. I was telling her: “My dear girl, you have a mind within your body. It is in a very safe place. Nobody can touch it. Your mind is not accessible to anybody. It is accessible to you and you alone. And that mind is the maker and the destroyer of happiness in your life. With many things in possession, one’s mind can remain unhappy. With very few things or with even nothing, one’s mind can still be happy.”

My dear boy, I want you to understand this secret and think about it. The entire effort of spirituality and spiritual pursuit is to bring about a consistent expansion to the mind. Instead of living as a selfish individual, as a mere member of a small family, let your mind start caring for the welfare of the larger section of the society.

What kind of welfare? Is it that you are required to give food, build houses or give dresses to people? What kind of welfare are you thinking about? When you know that the body has completed its growth and the rest of the growth is only for the mind, intelligence and heart, the greater welfare of the human individual and the society also must be bearing upon the mind, intelligence and heart.

So, let your focus be on these: Expansion of the mind; elevation of your attitude; and excellence in action. When all these three are blended together, it becomes a truly transformed personality – a new personality. This is the true purpose of religion and spirituality.

“Let your focus be on these: Expansion of the mind; elevation of your attitude; and excellence in action. When all these three are blended together, it becomes a truly transformed personality – a new personality. ” 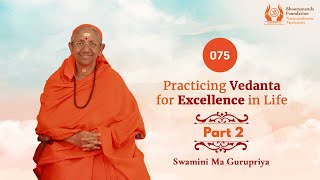 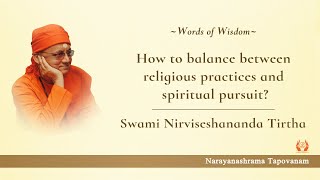 How to balance between religious practices and spiritual pursuit? | Swami Nirviseshananda Tirtha 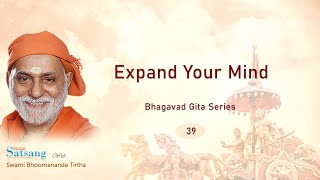 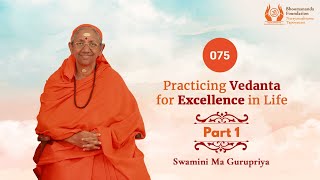